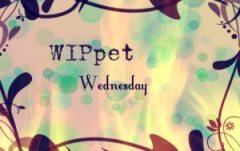 I’m running late again with my contribution to WIPpet Wednesday, but hey as the song goes I’ve saved the best for last!! (Well maybe – I guess you guys will be the judge of that.) I thought I’d share some more from my story The Inheritance which, as most of you probably know, I’m hoping to publish someday soon. When I’ve finished my editing that is and had it proofread. BUT the end is in sight. I thought I’d share another part with my character Emma. She’s fallen on hard times and life is difficult to say the least. So in honour of it being the 15th May today I thought I’d share about 15 lines. Technically they’re from chapter 14 but I really wanted to share them so I’ll have to bend the rules a little. Here they are.

She felt her lower lip begin to tremble. Tears were threatening to spill down her cheeks, but now was not the time to cry. She stood up, picking up the few plastic bags which contained everything she owned, and walked out of the room. She shut the door behind her and stood still for a moment at the top of the stairs looking down. What if I just throw myself down the stairs? she thought to herself. She knew that no one would care if she was gone. But I might just fall badly without killing myself, or worse still survive but be paralysed. No, she hadn’t thought suicide through properly. For the moment she’d just have to put up with her lot. I suppose I deserve it anyway, she thought bleakly and began to descend the stairs.

Emma had just enough money for the bus to the hostel and thankfully the bus stop was a short walk away. As she was waiting for the bus a few minutes later, she thought of Reg. She’d barely thought of him at all since she’d arrived in London, but now she remembered his kindness to her on the train. She also remembered him giving her his contact card, just as the Chinese couple had given her theirs. She’d neglected all of them.

If you would like to join in the WIPpet Wednesday fun, simply post an excerpt from your current work in progress on your blog that somehow correlates to the date (hence 15 lines for the 15th May). Then add your details to this linky. Thanks to K.L. Schwengel for hosting.

26 thoughts on “So alone – WIPpet Wednesday”