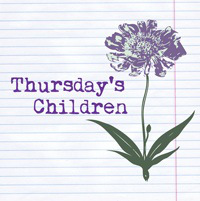 I can’t believe how fast Thursday’s Children comes around each week. But then again time in general seems to be whizzing by for me at the moment. If you’re not familiar with Thursday’s Children the idea is that you write a post on your blog about whatever inspires your writing.

I thought for this week’s Thursday’s Children I’d talk about family and how mine has gone some way towards inspiring my writing. My mum once told me that she thought me and my immediate family (i.e. my brother, my sister, my dad and herself) could almost write a story together. Her feeling was that we all had it in us to tell a cracking good yarn. So I guess in some ways I was steeped in storytelling as I grew up. When I was little my mum would tell me true stories about her own childhood which always began with ‘When I was a little girl…’ These stories were always so interesting for me as they would obviously involve not only her but her brothers (my uncles) and my grandparents. It was fun to hear about the scrapes she and her brothers got into.

My mum also enjoys creative writing herself and as I was growing up she always nurtured my craft. I would often share stories I’d written with her and she would give me helpful tips as to how to improve on what I’d written. I’m grateful to her for that. It’s been lovely to be able to share my work with her over the years.

While I was still only young my dad would read stories from the Bible to me. We had little booklets for children of single stories from it. My dad would read these stories to me and do different voices for different characters. One story used to make me squeal excitedly because when he got to a certain point, Dad would do a sudden nasty loud voice. I think it was one of the stories Jesus told about the servant who refuses to write off someone’s debt even though he himself has had his debt written off by his master.

I think I may have mentioned this in a previous post, but from a young age I would tell stories to my younger brother and sister. Some of them were about dogs tormenting cats with itching powder. My siblings ended up telling their own versions of the ‘Sniffy Dog’ stories. So I guess I inspired them too. Other stories I told them were about ‘Flopsy Bunny Rabbit’. The funny thing with the rabbit stories was that one time when we were in the car as a family in France, I began to tell a story about Flopsy Bunny going to Disneyland Paris. During that particular car journey, we started to see lots of signs for a certain theme park…

My brother and sister and I had no idea we were going there – it was all an amazing surprise. My mum later wondered if I’d twigged that we were going there and was telling that story deliberately. But I hadn’t. It was just a coincidence. I was being creative with my storytelling, realizing only that we were in the vicinity of Disneyland, so telling a story about that in particular.

Stories my grandparents told me have remained in my mind as well. One true story is really amusing. My paternal grandfather was in Spain many years ago. I can’t remember where he was or what he was doing there. But whilst he was out and about he came across a painting. As he was looking at it a man came up to him and asked him what he thought of it. My grandfather replied ‘Not much.’ The painting he was looking at just happened to be by Picasso. And you’ve guessed it – the man he’d spoken to was Picasso himself.

It’s stories like these which are really inspiring to me as a writer. My grandfather meeting Picasso like that is the sort of story I would love to be able to say I came up with. But although I haven’t, it’s inspiring to me to think that I might be able to emulate that kind of anecdote in my writing thanks to a wonderful story my grandfather told our family.

I’m sure it’s true for everyone that their families have inspired their writing in one way or another. It couldn’t really be any other way – families are a big part of our lives and our lives inpsire us, don’t they? I feel particularly with our families, it’s easy to forget that the way our families are have shaped us and not only us but the way we write. Sometimes, especially if our family background is difficult, we would rather forget them. But like it or not our writing is shaped by family.

If you would like to join in Thursday’s Children, just post on your blog whatever inspires your writing. Then add your name to this linky. Thanks to Rhiann Wynn-Nolet and Kristina Perez for hosting.